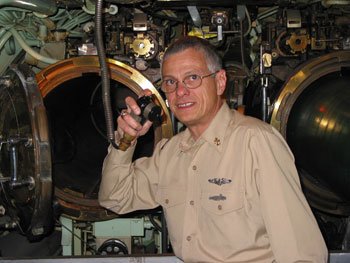 I have had a lifelong
fascination with submarines. In 2004, I was privileged to meet members of the USS Growler-SSG 577 crew during a concert performance. As I was acutely
aware of their service to our country during the Cold War, I played the theme
from “Crimson Tide,” enriched with black and white photographs of the original
Growler. Later, the crew told me that “even the toughest of their men, had tears
in their eyes while they were listening to the Navy Hymn” – Eternal Father
Strong to Save – which was used in the movie Crimson Tide. That same evening, I was
decorated with the insignias of Honorary Chief. I thank the Growler crew for
risking their lives to protect our Great Land of Freedom and Opportunity.

The CD is the greatest that Hector has ever done.  We listened to it twice before
going to bed and it just blew me away. He sounds like an 80 piece orchestra,
plus a choir. That Phantom of the Opera is too much.

Hector’s done it
again!  Who & what I hear you ask?   Hector Olivera that’s who and as expected
his latest CD I HAVE DREAMED [ MPI CD113] is another production that is
impossible to find any fault with….not that doing so is my role as reviewer
for Organ 1st magazine.   Whereas I’ve come across a lot of organ enthusiasts,
and organists for that matter, who have an affiliation and love of steam trains,
I’d be hard pressed to find one who has a passion for submarines!   Even harder
to name any other organist who has the distinction of being decorated with the
insignia of Honorary Chief of the USS Growler-SSG 577.   A concert performance
attended by the crew of the submarine resulted in their personal gesture of
appreciation….and they threw in a tour of the vessel for free!  Commencing
with the eerie sound of the sonar and the low rumble of the engines, Hector sets
the opening scene of the Sean Connery intermittently suspenseful 1990 film THE
HUNT FOR RED OCTOBER.  Remaining with the maritime theme,  Hector then musically
glides through the gripping and entertaining 1995 Hollywood film the CRIMSON
TIDE, which one critic described as The Caine Mutiny on Steroids!  Into the Hans
Zimmer music score he weaves the Navy Hymn ETERNAL FATHER STRONG TO SAVE. Many
years back I had the pleasure of knowing and working with a remarkable Japanese
organist by the name of Maria Kumagai and on one of the only four recordings she
made before she took a decision to opt out of the organ world for ever, I  was
thus introduced to a piece of music called LOTUS LAND.  The British composer was
Cyril Scott who had a wide reputation in England and on the Continent during the
early 20th Century, and he wrote this, and many similar descriptive pieces
during a period of his life when he studied mysticism and Orientalism.  In his
accompanying sleeve notes Hector indicates that Scott found the inspiration for
the piece after meeting Claude Debussy. Whichever of the two suggestions, both
are equally valid, and can be appreciated as Hector extracts some of the
delicate colours of orchestration from the Roland Atelier.  The pastoral, almost
mediaeval sounding opening to the Beatles composition GET BACK,  belies that
which follows!  Suddenly the trumpets sound, drums begin a steady throbbing beat
which in turn build up to take over this pop classic, which Lennon is reputed to
have said was a re-write of their earlier Lady Madonna.  It  revives memories of
the 1969 album Let it Be, and the time when the police raided the Apple Records
rooftop, thus bringing to rapid end the al fresco outdoor rehearsal!   It
wouldn’t be a Hector recording if it didn’t contain a little something by Bach,
but in this case its not one of his many Fugues, but merely a hint of the great
man himself.    Released back in 1967 by the group Procol Harum,  a WHITER SHADE
OF PALE was the work of Matthew Fisher, who drew inspiration for this popular
tune from Air on a G String and the Choral Prelude of Sleepers Awake.  As a
cinema projectionist back in the 60’s I was forced for many weeks to endure the
Widescreen re-issue of Gone with the Wind, and although Max Steiner won awards
for the Soundtrack, TARA’S THEME  never holds my interest as much as it does for
many other people.   Even so, this and I HAVE DREAMED from another Hollywood
blockbuster The King & I, are representative of those halcyon days when costume
dramas and musicals were big money spinners.  Writing of which I was dragged,
protesting vociferously to see the latest film version of PHANTOM OF THE OPERA.
In all honesty I was awestruck with the scenic effects, and clearly it had the
same effect on Hector.  As the auctioneers assistants remove the tarpaulin from
what remains of the huge bent and twisted chandelier, the auditorium fills with
the full and majestic sound of a Cathedral organ, and magically the Opera House
is restored to its former sumptuous granduer.  In a selection lasting almost 23
minutes, Hector captures for all time some of the main themes.  Listen out as
he even re-creates the “voice” of Christine as she makes her Opera House
debut.   I feel that with the release of the film version we will once again
have numerous organ recordings of the music.  Any we do hear will have to go a
long way to beat this one, when artist and instrument fuse as one to bring us
this translation.   In fact it’s the Cathedral of Notre Dame that is the setting
for the finale to this CD.   Not only do were hear a representation of the
famous organ, but there is the added excitement of an orchestra, and a
magnificent brass and percussion ensemble combining to play Saint Saens MAESTOSO
from SYMPHONY No 3…  all courtesy of the incredible Roland Atelier organ
and the virtuosity of Hector Olivera.  It is a World wide unbeatable
combination, and ever likely to remain so.

Maestro Hector Olivera at the Organ